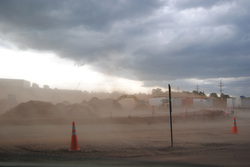 The weight of the air above an object exerts a force per unit area upon that object and this force is called pressure. Variations in pressure lead to the development of winds, which in turn influence our daily weather.

Sinking air in the vicinity of a high pressure center suppresses the upward motions needed to support the development of clouds and precipitation. This is why fair weather is commonly associated with an area of high pressure.

Rising motion in the vicinity of a low pressure center favors the development of clouds and precipitation, which is why cloudy weather (and likely precipitation) are commonly associated with an area of low pressure.

Sea Breezesa result of uneven surface heatingWhen spending a day at the beach, a noticeable drop in temperature may occur during the early afternoon as a cool breeze begins to blow off of the water. This wind is known as the "sea breeze", which occurs in response to differences in temperature between a body of water and neighboring land.

A few hours later, the sun's energy begins to warm the land more rapidly than the water. By later in the day, the temperature of the land increases while the temperature of the water remains relatively constant. This occurs because water, especially large bodies of water like a lake or ocean, are able to absorb more energy than land without warming.

It is important to remember that the air is not heated directly from above by the sun. In fact, most of the incoming solar energy actually passes right through the atmosphere. However, as the land absorbs this energy, heat is radiated back into the atmosphere (from the earth), warming the overlying air. Some of this heat is transported to higher levels in the atmosphere through convection.