Where the River meets the Sea 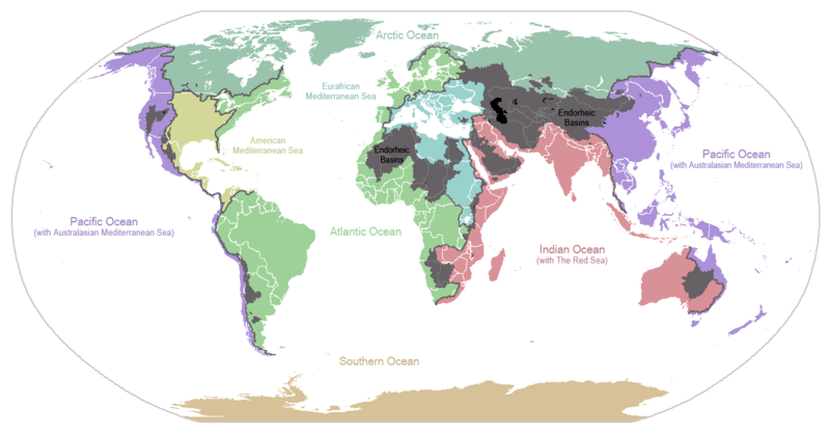 Drainage basins of the principal oceans and seas of the world. Grey areas are endorheic basins that do not drain to the ocean.  About 48.7% of the world's land drains to the Atlantic Ocean!

The Arctic Ocean drains most of Western and Northern Canada east of the Continental Divide, northern Alaska and parts of North Dakota, South Dakota, Minnesota, and Montana in the United States, the north shore of the Scandinavian peninsula in Europe, and much of central and northern Russia.
Just over 13% of the land in the world drains to the Pacific Ocean. Its basin includes much of China, southeastern Russia, Japan, the Korean Peninsula, most of Indonesia and Malaysia, the Philippines, all of the Pacific Islands, the northeast coast of Australia, and Canada and the United States west of the Continental Divide (including most of Alaska), as well as western Central America and South America west of the Andes.

The Indian Ocean's drainage basin also comprises about 13% of Earth's land. It drains the eastern coast of Africa, the coasts of the Red Sea and the Persian Gulf, the Indian subcontinent, Burma, and most of Australia. 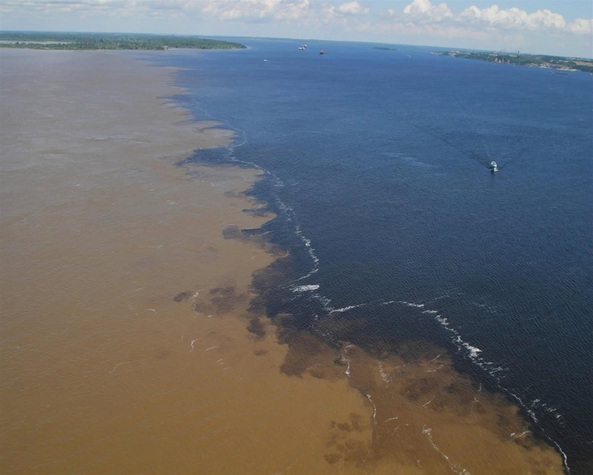 The meeting of the waters is a phenomenon that occurs at the confluence of the Rio Negro, black water, and the Solimões river of muddy water, where the waters of two rivers run side by side without mixing for a length of more than 6 km. It is one of the main tourist attractions of the city of Manaus in Amazonas, Brazil.

This phenomenon occurs due to the difference between the temperature and density of water, and also the speed of their currents: Negro River runs about 2 km / h at 28 ° C, while Solimões River runs from 4 to 6 km / h at a temperature of 22 ° C. There are dozens of travel agencies that offer the trip to the region in scripts that often include a stroll around the creeks of the region. If the tour is done on a small boat, visitors can put your hand in water while crossing from one side to the other waters, and feel that the rivers have different temperatures. 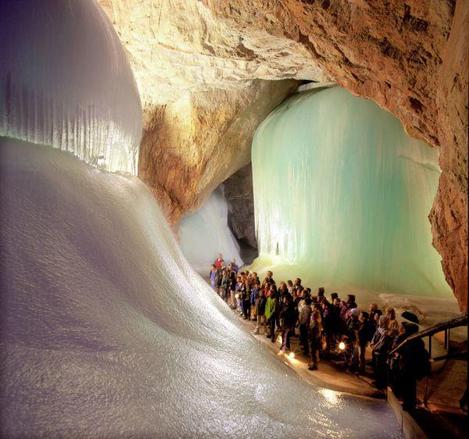 Eisriesenwelt is a limestone cave located beneath the Hochkogel Mountain, in Styria, about 70 kilometres from Salzburg. With 42 kilometres of tunnels and chambers, it is the largest ice cave in the world. Only the first kilometre is covered in ice but the rest of the cave is made of limestone. The cave was created by the Salzach River as it wound its way through the mountain.

The cave is called “The World of the Ice Giants” in German and was once thought to be the entrance to hell in Austrian lore. Anton Posselt explored the cave in 1879, and it became a tourist attraction in the 1920’s when paths up the mountain to the cave were built.