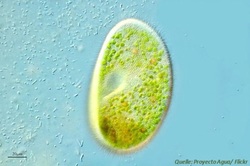 
We will have a short wrap-up discussion that will serve as one form as assessment. We will ask the students to come back to their seats and will ask them the following questions: 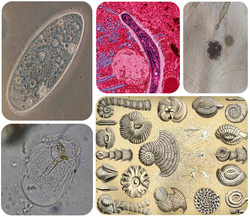 What are Protists?Protists are eukaryotes, and most are single-celled. You can think about protists as all eukaryotic organisms that are neither animals, nor plants, nor fungi.

Even among themselves, they have very little in common. Although theses organisms were put in the category Protista by Ernst Haeckel in 1866, the Kingdom Protista was not an accepted classification in the scientific world until the 1960s. These unique organisms can be so different from each other that sometimes Protista is called the “junk drawer kingdom.” This kingdom contains the eukaryotes that cannot be put into any other kingdom.

Unicellular or Multicellular?Most protists, such as the ones shown in Figure below, are so small that they can be seen only with a microscope. Protists are mostly unicellular (one-celled) eukaryotes that exist as independent cells. A few protists are multicellular (many-celled) and surprisingly large. These protists do not, however, show cellular specialization or differentiation into tissues. For example, kelp is a multicellular protist and can be over 100-meters long with cells that perform mostly the same jobs.

For classification, the protists are divided into three groups:

Protists come in many different shapes.

The cells of protists need to perform all of the functions that other cells do, such as grow and reproduce, maintain homeostasis, and obtain energy. They also need to obtain food to provide the energy to perform these functions.
For such simple organisms, protists get their food in a complicated process. Although there are many photosynthetic protists, such as algae, that get their energy from sunlight, many others must "swallow" their food through a process called endocytosis. Endocytosis happens when a cell takes in substances through its membrane.

The process is described below:
1. The protist wraps its cell wall and cell membrane around its prey, which is usually bacteria.
2. It creates a food vacuole, a sort of "food storage compartment," around the bacteria.
3. The protist produces toxins which paralyze its prey.
4. Once paralyzed, the food material moves through the vacuole and into the cytoplasm of the protist.
5. Other protists are parasitic and absorb nutrients meant for their host, harming the host in the process.

Animal-like Protists
Animal-like, plant-like, and fungi-like protists are different from each other mainly because they have different ways of getting carbon. Carbon is important in the formation of organic compounds like carbohydrates, lipids, proteins, and nucleic acids. You get it from eating, as do other animals.

Animal-like protists are called protozoa. Protozoa are single-celled eukaryotes that share certain traits with organisms in the animal kingdom. Like animals, they can move, and they they get their carbon from outside sources. They are heterotrophs, which means they eat things outside of themselves instead of producing their own food.

Humans could not live on Earth if it were not for protists. Why? Protists produce almost one-half of the oxygen on the planet, decompose and recycle nutrients that humans need to live, and make up a huge part of the food chain.
Humans use protists for many other reasons:

Many protists are also commonly used in medical research. For example, medicines made from protists are used in treatment of high blood pressure, digestion problems, ulcers, and arthritis.

Other protists are used in scientific studies. For example, slime molds are used to analyze the chemical signals used in cells.

Protists are also valuable in industry. Look on the back of a milk carton. You will most likely see carrageenan, which is extracted from red algae. This is used to make puddings and ice cream solid. Chemicals from other kinds of algae are used to produce many kinds of plastics.

3. Describe the characteristics of an animal-like protist.

4. Describe the characteristics of a plant-like protist.

5. Describe the characteristics of a fungi-like protist.

Apply Concepts7. Explain why protists are important to life on Earth.

8. You find a protist that is a heterotroph and lives in the ocean. Is this protist most similar to a plant, animal, or fungus? Why or why not?

Critical Thinking9. Imagine that you are a scientist delivering a paper called Protists: the Junk-Drawer Kingdom. Explain your reasoning for this title?