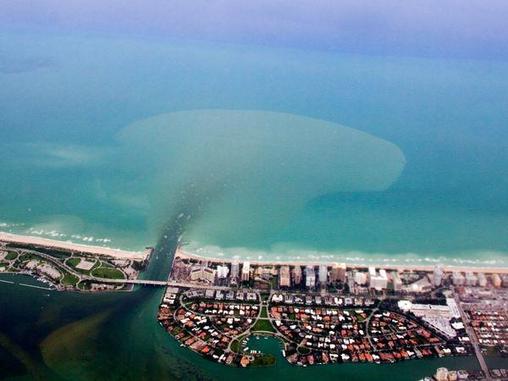 You know that nice fresh and clean smell you have after a rain storm? Well depending on where you live, that area might actually be cleaner after a heavy rainfall. Below is a picture of a pollution spill in the south of Florida, (US). Mind you, this spill is not from a factory up stream, or some company doing a secret pollution dump. It is just the day to day toxic build up on the streets and some untreated sewage that got washed from the roads into public waterways. Stormwater runoff happens when water from precipitation flows over impervious surfaces like sidewalks, roads, or anything paved. Some of the main pollutants that the runoff picks up are spilled motor vehicle fluids, pesticides for grass, solvents, and debris. The runoff doesn’t always empty into the ocean, but instead can also empty into water reservoirs that are used for drinking water, fishing, or other recreational activities. Not only can some of these pollutants poison aquatic life, humans can also become sick from eating diseased fish. This particular body of pollution was released from Biscanye Bay after a large rainstorm passed over North Miami Beach. 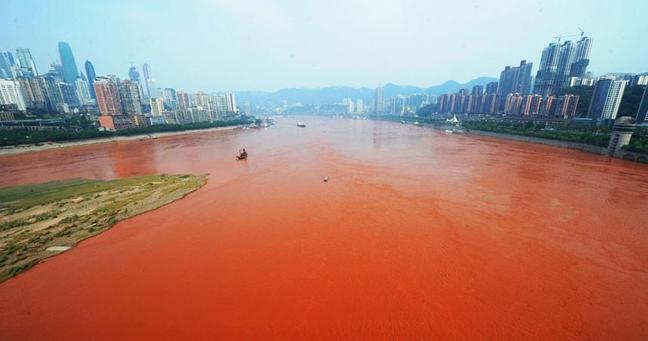 The Yangtze River, China’s longest river, suddenly turned a red colour over the course of a few days, beginning September 4, 2012. As of yet, scientists are unsure as to why. It is believed that one of the theories is industrial pollution.