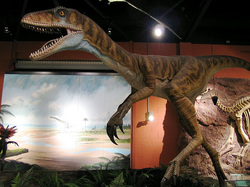 Today we learned that carbon is a very important part of our Earth. In fact, carbon makes life on Earth possible and exists in many different forms.

Can anyone tell me how human activities have been releasing too much carbon into the atmosphere?
Yes, activities such as fossil fuel combustion and deforestation, are releasing unnatural amounts of carbon dioxide into the atmosphere. Today, people are concerned that the high level of CO2 in the atmosphere is contributing to global climate change. Engineers are working to rebalance the carbon cycle by reducing CO2 emissions. For example, environmental engineers are studying how to remove carbon from the atmosphere (carbon sequestration), and mechanical and electrical engineers design buildings, homes, cars and appliances that use less energy.

How can you help engineers and scientists solve the global problem of climate change?
You can remember to turn off the lights, computers and stereos when you are finished, take shorter showers, ride a bike or walk, and talk to your family about recycling and other energy conservation measures. Global warming is not a problem that we can leave for the scientists and engineers — solving this problem requires everyone working to save energy and reduce our consumption of energy.