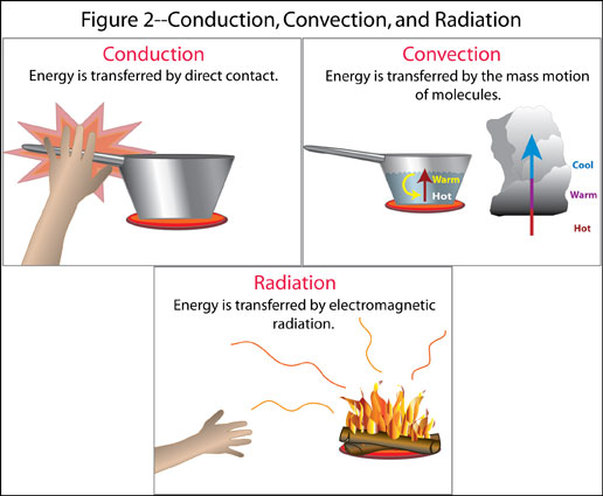 Convection is the transfer of heat by the actual movement of the warmed matter. Heat leaves the coffee cup as the currents of steam and air rise. Convection is the transfer of heat energy in a gas or liquid by movement of currents. (It can also happen is some solids, like sand.) The heat moves with the fluid. Consider this: convection is responsible for making macaroni rise and fall in a pot of heated water. The warmer portions of the water are less dense and therefore, they rise. Meanwhile, the cooler portions of the water fall because they are denser.

Conduction is the transfer of energy through matter from particle to particle. It is the transfer and distribution of heat energy from atom to atom within a substance. For example, a spoon in a cup of hot soup becomes warmer because the heat from the soup is conducted along the spoon. Conduction is most effective in solids-but it can happen in fluids. Fun fact: Have you ever noticed that metals tend to feel cold? Believe it or not, they are not colder! They only feel colder because they conduct heat away from your hand. You perceive the heat that is leaving your hand as cold.

Radiation: Electromagnetic waves that directly transport ENERGY through space. Sunlight is a form of radiation that is radiated through space to our planet without the aid of fluids or solids. The energy travels through nothingness! Just think of it! The sun transfers heat through 93 million miles of space. Because there are no solids (like a huge spoon) touching the sun and our planet, conduction is not responsible for bringing heat to Earth. Since there are no fluids (like air and water) in space, convection is not responsible for transferring the heat. Thus, radiation brings heat to our planet. 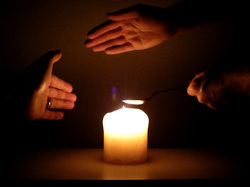 Heat is energy which flows from hot to cold. It will always flow from an object with a higher temperature to a cooler one. This causes the hotter object’s temperature to decrease and the cooler’s to increase, until both reach the same temperature. When this equilibrium is found, heat will stop flowing.

Heat is transferred in cooking by one of three methods – convection, conduction or radiation.

Boiling, deep frying and baking are all examples of convection.

Both boiling and deep frying use liquid to heat the food, although oil boils at a much higher temperature than water. When boiling water in a pan, the water at the bottom is heated. This hot water becomes less dense than the cold water above it. The less dense liquid rises, transferring its heat to the cooler water as it goes. It draws the cooler water in behind it, which in turn is then heated up. As the water rises to the surface it cools and sinks, to be heated up again in a continuous cycle.

When food is baked it is cooked by means of convection through air in an oven. This works in exactly the same way as water in a pan, but uses air instead of water. The air is heated at the bottom of the oven by an electric element or a gas flame, the hot air rises, transferring its heat and cooling down on the way. The cool air sinks to the bottom to be heated up again. And so it goes on. Fans are often used in ovens. They push the air around, giving a more even temperature throughout the oven - not just relying on the natural circulation of the hot air rising and the cool air sinking, which causes the top of the oven to be hotter than the bottom.

Unlike heating by convection it’s not the material itself that is moving, all movement is happening at an atomic level. When a metal pan is put onto a hob the heat is transferred from the hob through the metal in the bottom of the pan by conduction. Most metals are good conductors, but some metals are more conductive than others. Stainless steel isn’t a good conductor of heat, but copper is – that’s the reason why stainless steel pans often have copper bottoms.

Wood and plastic are not good conductors of heat, which is why spoons used to stir food during cooking tend to be made out of these materials. Heat is not conducted through the spoon to the handle, which makes it much easier to hold onto.

When hot, all objects radiate heat. Unlike convection and conduction, radiation doesn’t need a medium through which to carry heat – it can even carry heat through a vacuum. Radiation is used in two forms of cookery - grilling and microwaving.

Microwave ovens use high frequency electromagnetic waves which penetrate the food and are absorbed by the water molecules inside. The water molecules vibrate when hit by a microwave at exactly the right frequency and this vibration generates heat. The food is further heated by the energy from this molecule being transferred by conduction to neighbouring molecules. Microwaves can penetrate up to one centimetre, so the inside of the food as well as the surface is heated.

Strictly speaking, grilling food uses all three forms of heat transfer. The heat radiates from the grill and is absorbed through the surface of the food nearest to the grill. Conventional grills use infra-red radiation, which has a shorter wavelength than microwaves. The heat is then conducted from the surface to the inside of the food, which is then cooked by convection.