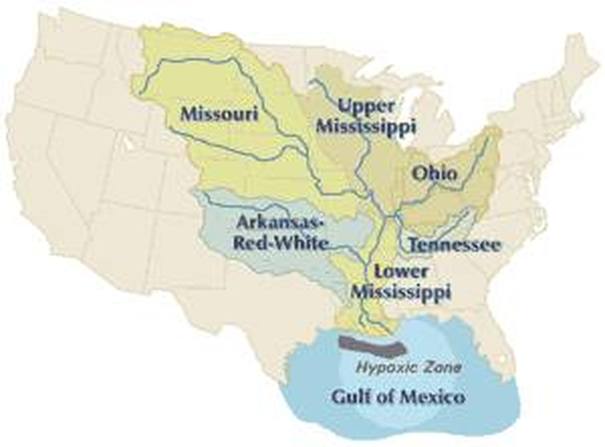 The Mississippi River drains the largest area of any U.S. river, much of it agricultural regions. Agricultural runoff and other water pollution that flows to the outlet is the cause of the hypoxic, or dead zone in the Gulf of Mexico. 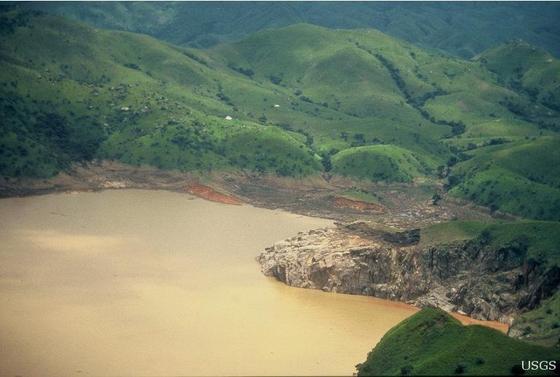 Lake Nyos in Cameroon has an unfortunate moniker attached; it is also known as “The Lake that Killed” or “Killer Lake”. The lake was responsible for the deaths of 1,700 people within 2 hours in 1986 after the lake outgassed so much carbon dioxide that it lowered the level of the lake by over a metre and turned the water to the colour of blood.

The lake is a crater lake within a large caldera on the flanks of an inactive stratovolcano 3,011 metres elevation. The volcano is located in the north-west region of Cameroon and is part of the rhyolitic and trachytic Mount Oku massif along the Cameroon volcanic line. The lake is around 1,400 metres long, 900 metres wide, and 208 metres deep; it is situated above a pool of magma that slowly leaks carbon dioxide. The northeast rim of the lake has lava fountain and basaltic flow deposits, on the north and east flanks pyroclastic deposits can be found.

The killer gas that emitted from the lake on August 21 1986 consisted of carbon dioxide mixed with sulphur and hydrogen; 1 cubic kilometre of the gas spread as far as 23 kilometres away from its source. It is thought the deadly emission occurred either due to overturn of stratified lake waters from a non-volcanic process, or to a phreatic explosion, or to injection of hot gas into the lake. The gas stayed close to the ground and swept over nearby villages and small towns. Around 1,700 people and 3,500 farm animals were killed; those that survived were left with long term side effects.

To prevent further lethal emissions from the lake, a degassing tube was installed in 2001. The tube siphons water from the bottom layers of water to the top to allow the carbon dioxide to leak in safe amounts.  National Geographic produced a short movie called "Death Fog" relaying the story.